Rotary Club of Gbagada was chartered as a Club by Rotary International on 27th February 1984. The Charter presentation was held thereafter with pomp and pageantry at Federal Palace Hotel Victoria Island, Lagos on May 12, 1984. Prior to its charter, the Club, which was sponsored by Rotary Club of Ilupeju had met for several months from November 1983, as a provisional Club, at the residence of the Charter President, Rotn. Gabriel Adenuga Taiwo.

It is worthy of mention that members of Rotary Club of Ilupeju were very helpful at the planning stage by giving the necessary Rotary information, recruitment drive and sharing fellowship with members of the fledging Club.

PDG Banjo Solaru, of blessed memory and Rotn. Sam Onabanjo, who were the President and Secretary respectively of the sponsoring Club, need to be singled out for their immense support.

Some members of the sponsoring Club transferred their membership to Gbagada while others attended the provisional Club meeting on regular basis.

It is on record that the following Rotarians from various Clubs, shared fellowship with the provisional Club. From Rotary Club of Ilupeju were -PDG Ade Adefeso, Gilbert George, Bayo Oguneye, Taiwo Koya, Tuyi Fabiyi, Sina Buraimoh-Ademuyewo and Awopetu; while Rotn Babs Ajayi came from Lagos, Lekan Ogundimu from Ikeja and Aina from Maiduguri.

With the caliber of committed Rotarians, visiting the provisional Club, to provide the necessary Rotary information and help entrench Rotary decorum, the Club was set to start its journey on a strong platform.

Of the charter members list published above, we have four who are still active in the Club, viz; PDG Adeniji Raji, PDG Yomi Adewunmi, PLG Bola Ayanwale and PAG Onafuwa. 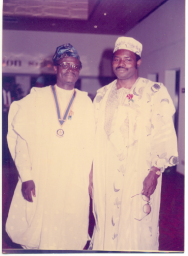 The achievements of the Club since existence should be attributed in part to the sense of direction given to it at inception.

The image of the Club in District 9110 is rated high while its role in Gbagada community is a catalogue of achievements.

The efforts of Rotary Club of Gbagada in its progressive role at rendering service can best be appreciated by her performance within the four avenues of service. – Club Service, Vocational, Community and International Service. This, we would look into in subsequent chapters.

What therefore informed the writing of this book,  is the desire to chronicle some of the historical landmarks since inception hoping that all those who read it would possibly pick one or two things which would be of benefit in the way they manage their Clubs (if they are Rotarians) or create better awareness among members of the public in what

Rotary Clubs do, why they do it and how they do it.

The mustard seed which was sown by Rotarian (Otunba) G. O. Adenuga Taiwo (Charter President) in 1984 has blossomed into an oak tree.

The initial enthusiasm, goodwill and esprit – de – corps in the Club had been sustained ever since.

The first project undertaken by the Club was the landscaping of the frontage of the Gbagada General Hospital under the administration of the Charter President, Rotn. Adenuga Taiwo in 1984 – 85.

The Club took another giant stride in 1985 – 86 when it carried out a ‘gift of life’ project during the presidency of Rotn. Dele Okuwa. The Club was responsible for the medical expenses totaling about N120, 000.00 (one hundred and twenty thousand Naira) of the Hole-in-the-heart patient. The girl who has since recovered fully is presently residing in Britain with her husband and children. She is in correspondence with the Club.

The club got its first district award in 1986 – 87 Rotary year under the Presidency of Rotn. Yomi Adewunmi while the Club’s first major project, the construction of a 25-bed Children Ward was conceived in 1986-87 and the foundation stone was laid. The project progressed and was completed in 3 years. It was commissioned in the 1988/89 Rotary year by the then Federal Minister of Health, Late Prof. Olikoye Ransome – Kuti during the Presidency of Rotn. Niji Raji. The hospital project remains the pride of the Club till date.

It is pertinent to point out that throughout the three years of construction, all weekly meetings of the Club were held on the site and all donations/contributions were channeled towards the completion of the project

The Club took another giant stride in 1985 – 86 when it carried out a ‘gift of life’ project during the presidency of Rotn. Dele Okuwa. The Club was responsible for the medical expenses totaling about N120, 000.00 (one hundred and twenty thousand Naira) of the Hole-in-the-heart patient. The girl who has since recovered fully is presently residing in Britain with her husband and children. She is in correspondence with the Club.