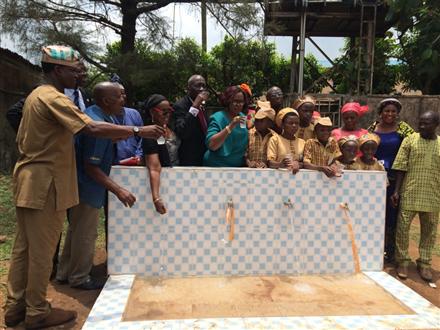 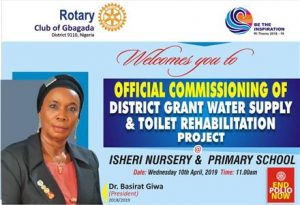 The club dug a borehole, set up two overhead tanks, constructed several toilets, and a water fountain within the premises of Isheri Nursery and Primary School located in Isheri, a community on the outskirts of Lagos. The total population of the school children (age between 2 and 10 years old), is 570, with 30 members of staff.

The water fountain will also help in the provision of potable water to the community.

The project is a result of Needs Assessment from the State Universal Basic Education Board (SUBEB). The commissioning ceremony was attended by all stakeholders from SUBEB, Ikosi/Isheri Local Government, the Baale of Isheri, members of staff, Rotarians, and volunteers. Other stakeholders such as members of the Parents Forum (PF), School Based Management Committee (SBMC) were also present, and promised to assist the staff, parents, and the children with sustainability of the project.

The Grant was funded both by the District and the Club on a 50/50 basis.